This savory vegan corn & mushroom bread pudding is a perfect main or side dish. Bringing together shitake mushrooms, cremini mushrooms and corn for a casserole worth celebrating.  In addition to the fresh vegetables, sourdough bread leads that tangy flavor. Along with jalapenos that I harvested from my garden for that bit of kick.  While making this dish I was thinking of my love for bread puddings, sweet and savory.

The last time I had a piece of warm bread pudding was at a quirky country restaurant in Woodside, California. The restaurant is Buck’s of Woodside, not too far from where I live.  It’s always fun to get out of town for a memorable meal. The 30 minute drive to the country from where I live is fun. The restaurant always reminds me of mom’s home cooking.  The trip is worth it because they serve a white chocolate bread pudding with toasted pecans and caramel sauce. From the first bite of this dessert had me daydreaming while I was eating. It’s so easy to get distracted by delicious day dreams.

Recipe Tips For This Bread Pudding

My bread pudding is a savory one; and even though it’s vegan it still has a moist gooey center with a crisp crust.   Making this egg and dairy free I used almond milk with cornstarch to replace the eggs and I used vegan cheese for that added richness. When using vegan cheese make sure to get a brand that melts good, I found out the hard way with this recipe that the brand I used melted ok in the center of the pudding but on top the shredded strands of cheese kind of just stood there.  It still tasted great, don’t get me wrong but I noticed it in the photos.

In conclusion this savory vegan corn & mushroom bread pudding will satisfy your cravings for a dinner time pudding but still amazing for breakfast.  Because I did have it for a morning meal the day after and I used the microwave to heat up a portion and that was a bad idea, I ended up with a mushy texture.  So make sure when heating up this delicious dish the next day that you use a conventional oven or toaster oven to ensure a crispy crust; no one likes a sad and soggy bread pudding.

Serve this Corn & Mushroom Bread pudding as a side dish and serve these dishes with it: 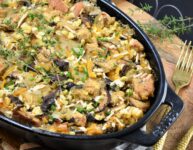 This savory vegan bread pudding combines earthy mushrooms, sweet corn and a kick from jalapenos for a delicious main course or side dish for any day of the week or a special holiday dish

Bread pudding has the most plebeian of origins, but it now shows up on the dessert menus of upscale restaurants. Food historians trace the history of bread pudding to the early 11th and 12 centuries…read on

Bread pudding is a dish with very old roots. It evolved as a use for stale bread. Cooks from many cultures throughout history have been loathe to waste stale bread, so they invented many dishes, both savory and sweet, that utilize it.